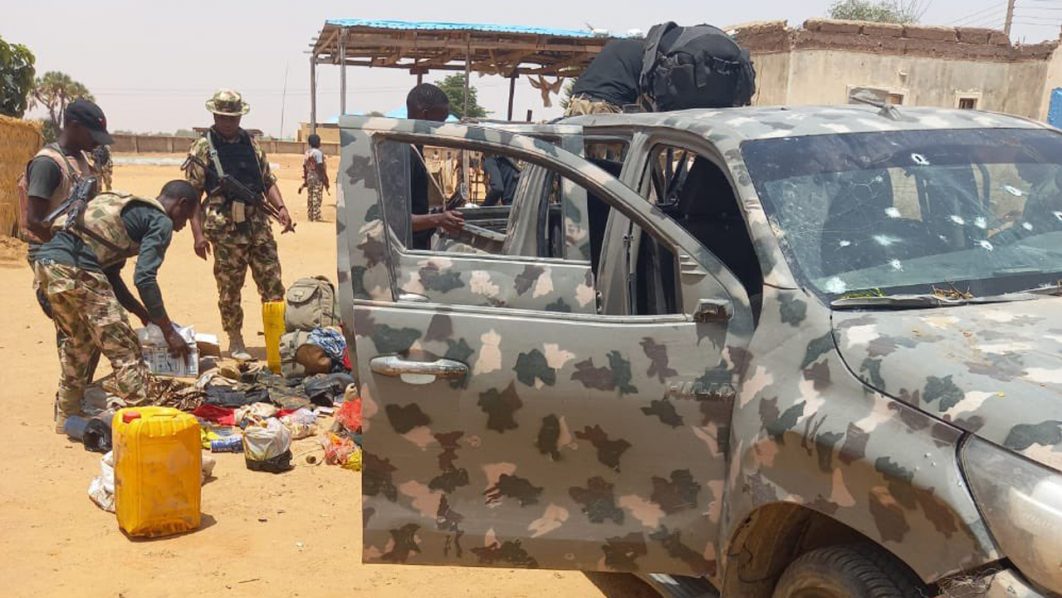 Troops of the Joint Task Force in the North East, Operation Hadin Kai (OPHK), deployed alongside Cameroonian Defence Force, have exterminated seven Islamic State in West Africa Province (ISWAP) terrorists at the Forward Operating Base (FOB), Wulgo.
Army spokesman, Brig-General Onyema Nwachukwu, who made the disclosure, yesterday, noted that the vigilant troops, while on a patrol, successfully foiled attempted infiltration of the terrorists into the camp.
“The troops swiftly responded with overwhelming volume of fire and spontaneous reinforcement from the Battalion Headquarters, compelling the terrorists to retreat. Troops immediately carried out a hot pursuit and exploitation after the encounter, along the terrorists’ route of withdrawal and neutralised three Boko Haram Terrorists (BHTs). The gallant troops also recovered three AK-47 rifles, six magazines and 50 rounds of 7.62mm special ammunition.”
In another development, four ISWAP/BHTs terrorists have met their waterloo same date, around 151 Battalion location. The terrorists were burnt beyond recognition, as their truck mounted with anti-aircraft guns ran over Vehicle Improvised Explosive Device.
Troops are reportedly conducting further exploitation ahead of the location to clear any surviving terrorist.
MEANWHILE, journalists in the country have been urged to use their various media to encourage troops at the warfront.
The Commander Defence Headquarters, Special Operations Force, Brig-Gen. Innocent Olotta, made the appeal in Bida, Niger State, while decorating 53 soldiers who were recently promoted.
Olotta lauded journalists for their positive reportage on the activities of military to combat terrorism and other criminal activities across the country.
The journalism profession requires that every practitioner must evaluate their evidence before publication, especially when reporting the current campaign against terrorism and other crimes,” the General said.
He enjoined media practitioners to support the fight against criminality by being objective and patriotic in their duties.
The officers promoted included both administrative workers and soldiers in Zamfara, Kaduna and some trouble areas in Niger State.
Olotta, who appreciated the top military brass for approving the promotion, reminded the elevated officers to reciprocate diligent service.
Earlier in his goodwill message, Warrant Officer Ojo Adebayo charged the soldiers to see their promotion as a fruit of hardwork.
Responding on behalf of other promoted soldiers, Staff Sgt. Friday Peters assured that they would continue to defend the integrity and sovereignty of the country.