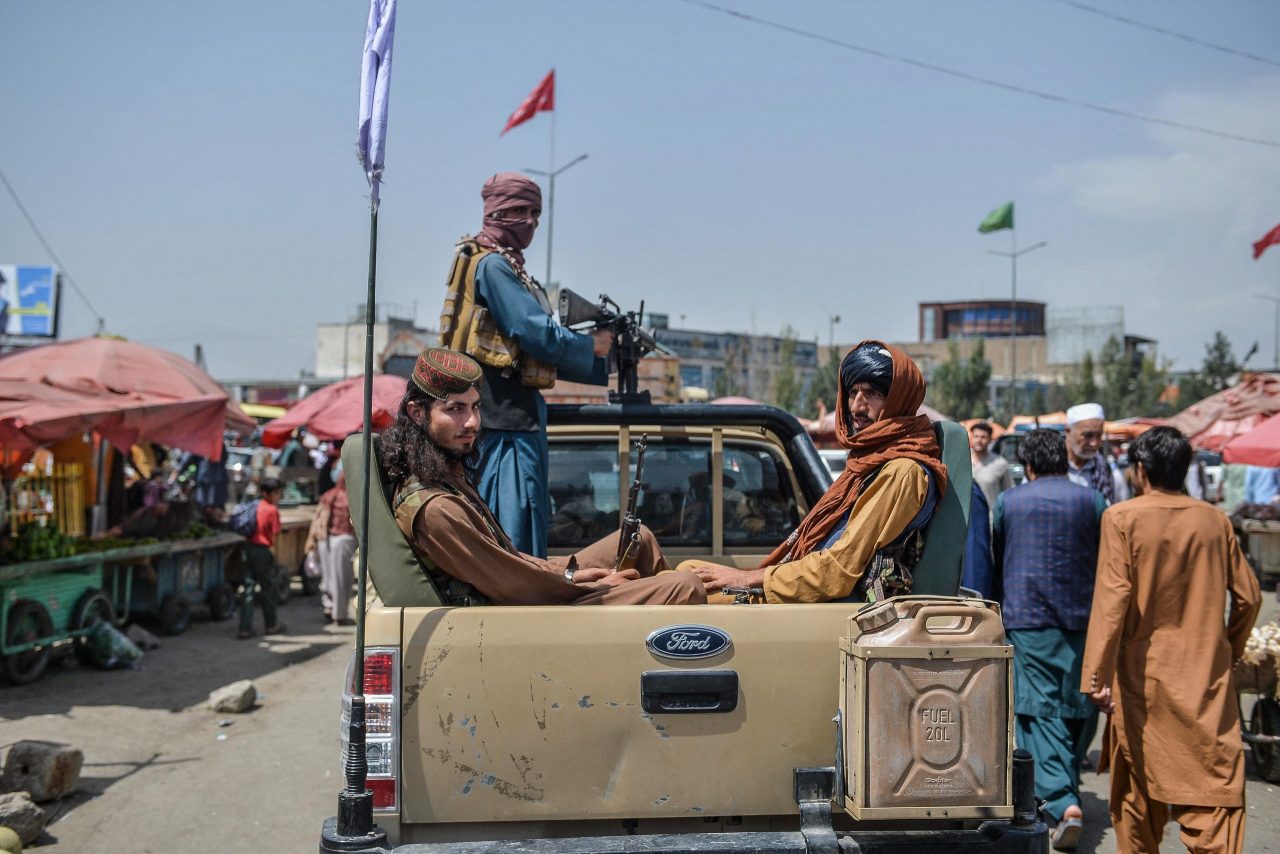 Taliban fighters on a pick-up truck move around a market area, flocked with local Afghan people at the Kote Sangi area of Kabul on August 17, 2021, after Taliban seized control of the capital following the collapse of the Afghan government. (Photo by Hoshang Hashimi / AFP)

The turn of events in Afghanistan that saw the Talibans effectively sacking government and seizing power must necessarily pose deep concern for Nigeria in her 12-year old struggle against Boko Haram terrorists. The question is whether the insurgents will one day overrun the country as happened in Afghanistan. Whatever American withdrawal from Afghanistan means, the invasion has been disastrous with imminent chain reactions in parts of the world.
Taliban fighters on a pick-up truck move around a market area, flocked with local Afghan people at the Kote Sangi area of Kabul on August 17, 2021, after Taliban seized control of the capital following the collapse of the Afghan government. (Photo by Hoshang Hashimi / AFP)
That the Taliban could gain another foothold on power after 20 years of warfare readily emboldens prowling militia groups in Saharan Africa especially. Indeed, the Boko Haram crisis brings Nigeria closer to Afghanistan, both in substance and symbolism. That is a reason for Nigeria to be apprehensive, and a warning on State actors to be clear headed and proactive in finding pragmatic homegrown solutions to ending insurgency before it ends Nigeria.

In horror, the world recently watched chaotic scenes of Afghans scampering for their lives shortly after the Taliban forces made in-roads into provinces and the presidential palace. President Joe Biden had earlier withdrawn American troops, saying the mission of maintaining the stalemate between Afghan and Taliban forces was no longer sustainable. In about 20 years, the U.S. had sunk at least $2 trillion into the war against international terrorism in Afghanistan. Over 2,300 American military men have perished, more than 20,000 wounded and half a million Afghans have died or wounded. Apparently fatigued by the war without end, it was time to back off for the Afghans armed forces to fight on. Afghanistan didn’t fight, it literally collapsed. The Taliban regrouped and without a fight captured the biggest cities, including Kabul, forcing President Ashraf Ghani to flee the country.

The implication is far-reaching for the troubled world. Unlike the Taliban of old, the new crusaders are vicious and well-equipped by the American prodigal investments in military hardware. When the Taliban last ran the country in the 1990s, they kept girls out of school, conned women to their homes and beat anyone who listened to music or wore the wrong clothes. Now, they are murdering civil servants and NGO workers. They have threatened to spread around the region.

Those are not empty threats. The U.S. withdrawal gifted the Taliban $20 billion worth of military hardware. Taliban now has an air force and 11 military bases, plus an army of well-trained soldiers equipped with the latest weapons and gadgets. In the three months from April to June 2021, the U.S. handed over to the Afghan National Defence and Security Forces (ANDSF) six A-29 light attack aircraft, 174 High Mobility Multipurpose Wheeled Vehicles (Humvees), about 10,000 2.75 inch high-explosive rockets, 61,000 40-mm high explosive rounds, rounds of .50 calibre ammo and 7.62 mm bullets and lot more.

Furthermore, The Taliban has announced its intention to govern with a rabid form of Sharia Law, restoring the Emirate system in other parts of the world. They have already ordered women to quit formal education. They are decimating Christian adherents and other faiths. They have sent strong solidarity to their brethren in Nigeria and are determined to enforce Sharia throughout the country and the rest of the continent. Islamist groups waging insurgencies in Africa are already celebrating them.

Nigeria is not far-off Afghanistan and Syria in terrorism index ranking. Nigeria has its version of the Taliban in Boko Haram that has violently ravaged the North East for about 20 years, with reign of terror in Chad, Niger and Cameroun. There are also killer herders and kidnappers ravaging the entire country. From Chad and Libya is an influx of extremist groups fighting to occupy territories in the Sahel region. So, across the East and West Africa are Islamist militant groups with some form of affiliation to al-Qaeda, an organisation the United Nations (UN) has said shares links with the Taliban in Afghanistan. All of these suggest an Africa that may be the next epi-centre of global terrorism.

The American debacle in Afghanistan is a vital lesson for President Buhari, the political class and elite that have always been looking towards the West as the anodyne to local problems. In their colonial mind-set and self-delusion, they have always been beaconing on American omnipotence, forgetting the glaring fallibility of the super-power, its ‘America first’ policy and age-long cliché of ‘‘no free lunch.’’ The current public office holders are not better. Following the acquisition of Super Tucano fighter jets for the sum of $494 million, the president himself took the country by surprise by naively requesting Washington to relocate its Africa high command, the military base from Stuttgart, Germany to Africa to contain terrorist threats, for which the U.S. declined. It was as naïve as it is a non-starter. The political class should see that there is no real alternative to homegrown solutions and good leadership.

As a matter of fact, tackling regional conflicts and insurgents requires more tact than military intervention and impositions. The United States’ foreign policy in Afghanistan did little in nation-building but more of brute force and compelling western democracy on indigenous societies that find it alien. Cultural clashes and imposition of foreign models on communities could only breed more resistance and endless crises. It is the same disastrous outing in Iraq, Libya and now in Afghanistan.

As in Afghanistan, Islamist movements in Africa have flourished in countries where they have been able to capitalise on weak State institutions, and irresponsible leaderships that offered nothing in good education, healthcare and general well-being. The Nigerian government and neighbouring countries should not continue on the worn-out path but focus on real nation-building. They need to scale down on corruption, malfeasance and ineptitude, to push for social welfare that reduces poverty, hunger, deprivation, illiteracy and sickness. That is the political solution to sustainable onslaught on insurgency. No amount of deodorising terrorists as bandits or the fantasy of deradicalising repentant terrorists will compensate for failure to tackle the insecurity from the root. But a Nigeria surging high in COVID-19 infection rates, rising food insecurity, cost of living and inflation, is clearly not doing much to stave insurgency and crimes off their motivations.

Certainly, the Nigerian government needs to get serious with nation-building and tackling insurgency to end it. The laid-back Buhari administration and his intransigent stance on open grazing and charting obsolete grazing routes where none exists does not show such commitment to a safer country that is urgently needed at this time. Nigeria is already on the brink. Only efficient leadership and sincerity of purpose can pull it back to safety.