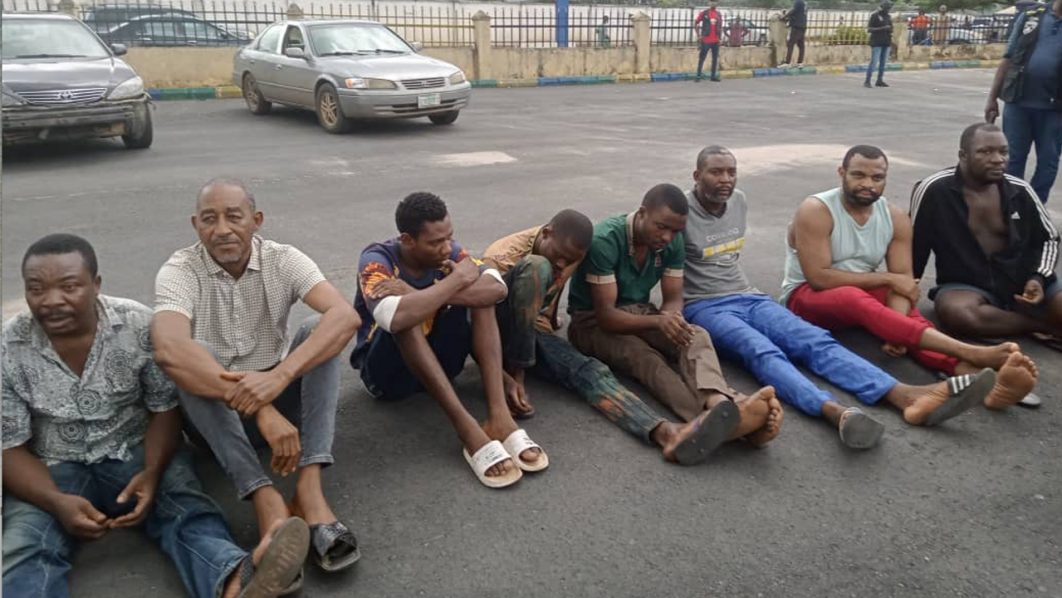 He further disclosed that on further interrogation, the suspects led operatives to receivers of the stolen vehicles belonging to other victims.
The suspects
The receivers were, “Obinna Okoroeze ‘male’ aged 55yrs of Abueke Ihitte Uboma LGA, Imo State, Uchechukwu Aniebo ‘male’ aged 43yrs of Udi, Enugu State, Ekpeta Joseph ‘male’ aged 32yrs of Aninri LGA, Enugu State.
The recovered vehicles were two Black coloured Lexus RX330, one ash coloured Toyota Camry Pencil Light Car, one red coloured Toyota Camry Car, one black coloured Toyota Highlander SUV 2011 model, one carton coloured Toyota Sienna car, one Mercedes-Benz 190 Car, and one black coloured Toyota Camry 2004 Big Daddy model.
He said: “Following the kidnapping of one Okechukwu Mbata, aged 42yrs on 10/10/2019 about 1900hrs and Kelechi Anoruo ‘m’ aged 41yrs on 3/06/2021 respectively, operatives of the Imo State Command immediately swung into action and on 10/08/2021 about 1000hrs, through credible technical intelligence, the anti-kidnapping unit of the command, mobilised and rescued the victims in their hideout unhurt and in the process, one of the kidnappers, Nwanosike Chukwuka ‘m’ aged 38yrs of Ubahanwa Otulu in Oru West LGA, was arrested.
“The suspect on interrogation, confessed to the crime, mentioned other members of the syndicate and led Police operatives to their hideout in Ebonyi State.
“On 09/09/2021 at about 1720hrs, the anti-kidnapping unit stormed their hideout at Idembia Izza South LGA of Ebonyi State.
The hoodlums on sighting the operatives engaged them in a gun duel, but were overwhelmed by the operatives and in the process, the suspects were also arrested and taken to the station.
“On interrogation, the suspects confessed to the crime and revealed their respective roles in the commission of the crime and admitted being the syndicate that have been terrorising the South East region and its environs.
“On combing their hideout, the following exhibits were recovered, which includes, one Assault Rifle loaded with 22 rounds of live ammunition, two Pump Action Guns loaded with 33 rounds of live cartridges, one cut to size Double Barrel Gun, one English Berretta Pistol with 8 rounds of live ammunition, and two
master keys.”
“I am using this medium to call on Imolites whose vehicles were robbed or stolen to come to the Police State Headquarters with proof of ownership for identification and collection. Also, I encourage residents and citizens of the state to always report criminal cases on time as this will assist the Police to apprehend the perpetrators in good time.
“Meanwhile, the Command has put a lot of strategies in place to checkmate crimes and criminality in the state,” he added.