Published
on
By
Naija News reports that the meeting which was on the renewed attacks by Boko Haram and the Islamic State in West Africa Province, ISWAP, in Borno was held at the Defence headquarters in Abuja.
CDS Irabor and Zulum
Zulum was with senators Kashim Shettima (Borno Central), Muhammad Ali Ndume (Borno South) and Abubakar Kyari (Borno North) on Monday, in the closed-door meeting.
Shettima exchanging pleasantries as Zulum looks on
It was gathered that the Borno governor and lawmakers expressed concern over the security challenges facing the northeast state.
They also stated the need to contain any further attacks and abductions of citizens in all parts of the State. 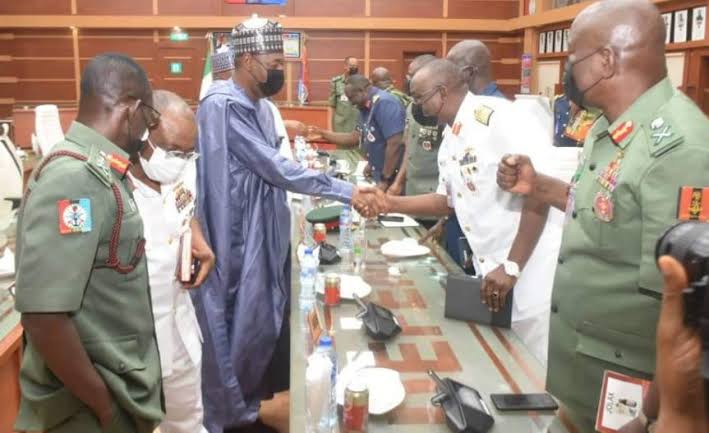 The delegation and security operatives resolved to take undisclosed measures to improve security situation across the State.
Meanwhile, operatives of the Nigerian Police, Niger State Command have arrested a 50-year-old man, Umar Samaila suspected to be the spiritual leader of bandits in the state.
Samaila is also reported to have spiritual control over Nasarawa and Abuja as well as revealed in a statement on Monday by the spokesman for the Niger State Police Command, Wasiu Abiodun.
The long arm of the law caught up with him on Saturday when security operatives, based on actionable intelligence stormed a location where the bandits were planning to execute a raid and kidnap of some worshippers the next day in a church at Buku village in Abaji Area of the Federal Capital Territory (FCT).
The arrested suspect will be transferred to Abuja for further interrogation, Abiodun stated.
George Oshogwe Ogbolu is a Digital Media Strategist | Content Writer | Journalist | New Media Influencer | Proofreader and a Deputy Editor at Naija News.
Copyright © 2021 Naija News. All rights reserved.