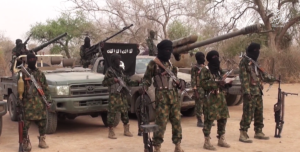 Dreaded armed members of Boko Haram sect in large gun trucks and motorcycles invaded Dikwa Local Government Area of Borno state engaging military troops as hundreds of residents flee into Bush for safety.
This attack is coming barely 24 hours after handing over the baton to the newly appointed Chief of Army Staff, Major General Ibrahim Attahiru, by his predecessor, General Yusuf Buratai (Rtd). This confirmed the purported video released by a factional leader of the sect Abubakar Shekau that the New Service Chiefs cannot do anything good to end the over decade crisis.
Dikwa is in Borno Central, where its Shehu, His Royal Highness, Dr Abba Tor Masta II, died last week after a protracted illness.
The late Shehu’s Palace was hitherto taken over and declared as a home base to one of the top Boko Haram Commander and his lieutenants some year back before troops recover it after a fierce battle.
Sources and fleeing residents told Vanguard on phone from Dikwa that the town is under series of sporadic gunshots and explosions as they ran for their dear lives.
Dikwa is about 60km drive from Maiduguri, the state capital and a stone throw from Mafa Local Government Area where Governor Babagana Zulum hailed from.
Vanguard News Nigeria